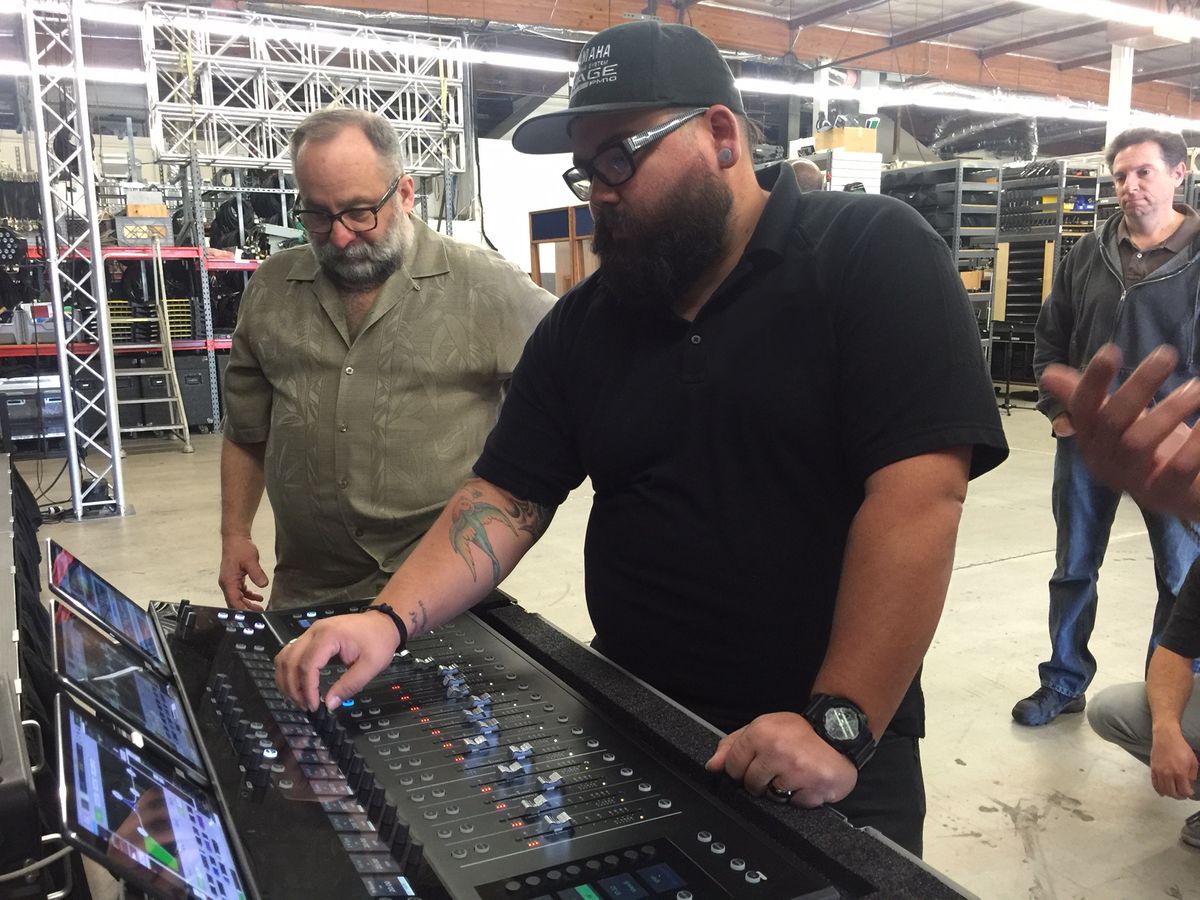 Today, we had a look at the prototype of the forthcoming Mackie DC16, and we have to say that we are blown away. Using a DL32R and our favorite audio networking and control protocol (Dante™, duh) we were set up and mixing in seconds with a side of Mackie we've never seen.

Aside from being snappy and elegant, the surface was surprisingly easy to get around on. And with the added benefits of dockable iPads, we felt like we had all the control and freedom to move around our venue that we needed.

The surface also has a 4x4 Dante™ audio interface on the chip, allowing headphone cues and talkback and the like. It never really felt like other "brain-in-the-box" systems to us. With the great feature set of the DL32R we have already come to know, we were really excited about the possibility of a high performance mixer system with recording that was easy to set up and great for permanent or temporary installation.

We will follow up when we have a chance to take it out on a show. For now, we think schools and houses of worship especially should be looking out for this device when it becomes available later this year.

Stay up to date on our events, training, and special email-only promotions through our mailing list. We promise we won't annoy you with constant blasts, just occasional stuff we think our more savvy customers would be interested in.

Not getting the best mix results out of your room? Come in and get a demo on some Genelec’s with new GLM 4 calibration software. Bring in some material and hear the difference! Give us a call and set up a demo.

When audience members are seated inside their vehicles listening to the PA, what effect does this have on the listening experience?

RIGHT NOW AT HOLLYWOOD SOUND SYSTEMS - From the Rivage PM Series - Hollywood Sound Systems is pleased to present the extraordinary Yamaha Rivage PM5 and Rivage PM3 Digital Mixing Consoles - recently awarded the IBC 2020 Best of Show Award Virtual Edition. Interested in a demo? For a limited time and by appointment only - give us a call! (323) 466-2416

Hollywood Sound Systems is pleased to supply the license-free, low-power FM transmitter package for the Magic Asphalt Comedy Show – the marvelous drive-in comedy series that’s currently playing onstage every weekend in the parking lot of the historic Magic Castle in Hollywood – boasting an impressive line-up of comics performing “under the stars” while audience members dine in their cars and tune in via their car radios. Comedian Tammy Jo Dearen and her wife Nikole Larson came up with the idea for the show, intending to bring community and comedy together during this challenging time. Find out more here - https://nightout.com/promoters/18475/events/tickets. Images by Nikole Larson, provided by Magic Asphalt. Drive-in, dine-in, and laugh!

Yes we are open, give us a call!

Exploring the sounds of Mars with DPA

Hearing is the last of the five senses we have yet to exercise on the Red Planet. To gain some insights into the Martian soundscape, the Mars 2020 Rover will be outfitted with audio equipment from DPA Microphones. NASA’s Mars 2020 Rover is taking off in February 2020 for a seven-month journey to t...

Can’t wait to hear this!

The Whirlwind CabDriver is a professional's handy little self-powered tool for testing loudspeakers in or out of the Cab...inet. We love 'em, we rent 'em and...

Here's a brief "Sound Bite" about something else we have found useful. https://www.youtube.com/watch?v=PfMjAzOaEcY

Capturing the Performer's Perspective (headphones on for immersive audio) Have you ever played a Bösendorfer? Matt Frazier from DPA Microphones recruited our own Ben Klinger to give us all an opportunity to hear a magnificent instrument (in this case a model 280VC) exactly as a player does. He utilized only a DPA Microphones A/S 4560 binaural headset microphone (you can see Ben wearing it) running into a DPA MMA-A audio interface (which was connected to his phone). No filtering or processing of any type was employed. Though the space was not designed for recording, you can still hear a sense of dimension not typically experienced with traditional piano recording techniques. Depending on the context, this approach might not wholly replace the direct presence of a recorded piano. As a blended element, however, I think there is real potential for capturing unique nuance and depth. Check it out. Special thanks to Ben Klinger and Classic Pianos - WA in Bellevue for making this recording possible. Here's the mic: https://lnkd.in/gWbKUTm And the interface: https://lnkd.in/g_zip29 #recording #microphone #proaudio #pro #proav #audio #audioengineer #immersive #immersiveexperience #immersivetechnology #music #musicindustry #piano

We have the MMA-A available for Rental at HSS. Give us a call!

This disinfectant foam is a timely product, quick and simple to use for microphones and other small electronics and it's available from us. Check it out! https://www.hollywoodsound.com/microphome-is-available-at-hollywood-sound-systems

This disinfectant foam is a timely product, quick and simple to use for microphones and other small electronics and it's available from us. Check it out! https://www.hollywoodsound.com/microphome-is-available-at-hollywood-sound-systems

(parking in front and back of building / WILL CALL in back)